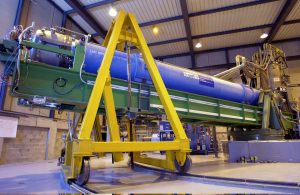 The CERN Axion Solar Telescope (CAST) is an experiment to search for hypothetical particles called “axions”. These have been proposed by some theoretical physicists to explain why there is a subtle difference between matter and antimatter in processes involving the weak force, but not the strong force. If axions exist, they could be found in the centre of the Sun and they could also make up invisible dark matter.

CAST is searching for these particles with a telescope designed to detect axions from the Sun. It uses an unexpected hybrid of equipment from particle physics and astronomy. The telescope is made from a prototype of a dipole magnet for the Large Hadron Collider, with its hollow beam pipes acting as viewing tubes. To allow the magnet to operate in a superconducting state, it is supplied with cryogenic infrastructure previously used by the Large Electron-Positron collider’s DELPHI experiment. A focusing mirror system for X-rays (recovered from the German space programme), an X-ray detector at each end, and a moving platform add the final touches to turn the magnet into a telescope that tracks the Sun.

The idea is that the magnetic field acts as a catalyst to transform axions into X-rays, making them relatively easy to detect. The strength of the superconducting dipole magnet and its long length ensure the efficiency of the process. CAST brings together techniques from particle physics and astronomy, and benefits from CERN’s expertise in accelerators, X-ray detection, magnets and cryogenics.